I LOVE YOU. I'M SO FUCKING PROUD OF YOU. 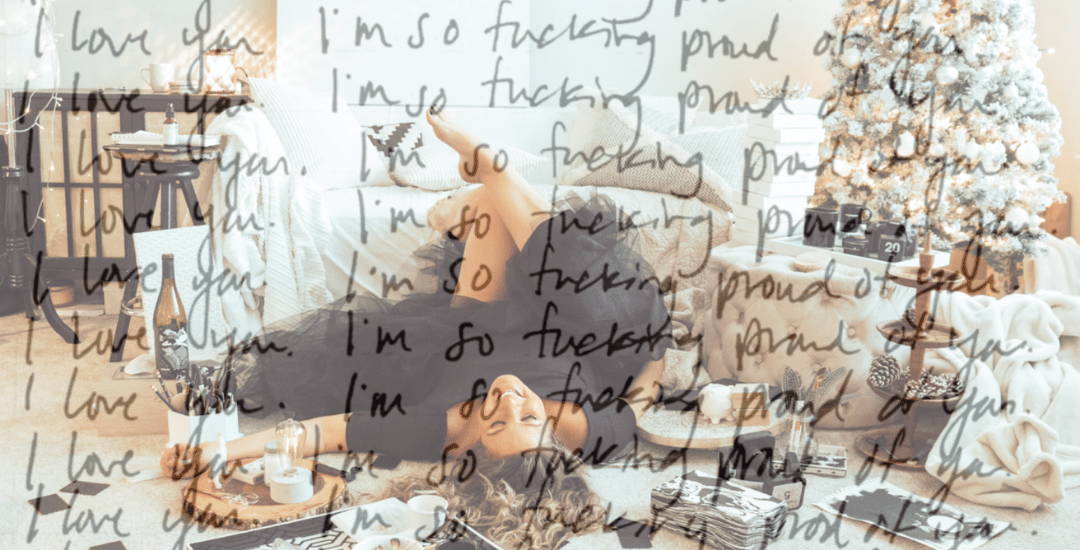 When you're ready to up-level, your mindset matters.

I made this all for you, ya badass bitch.

I double dog dare you to break the rules, push past your fears, and believe you're capable of becoming exactly who you know you are: powerful AF.
Embrace the energy that you truly want to embody. 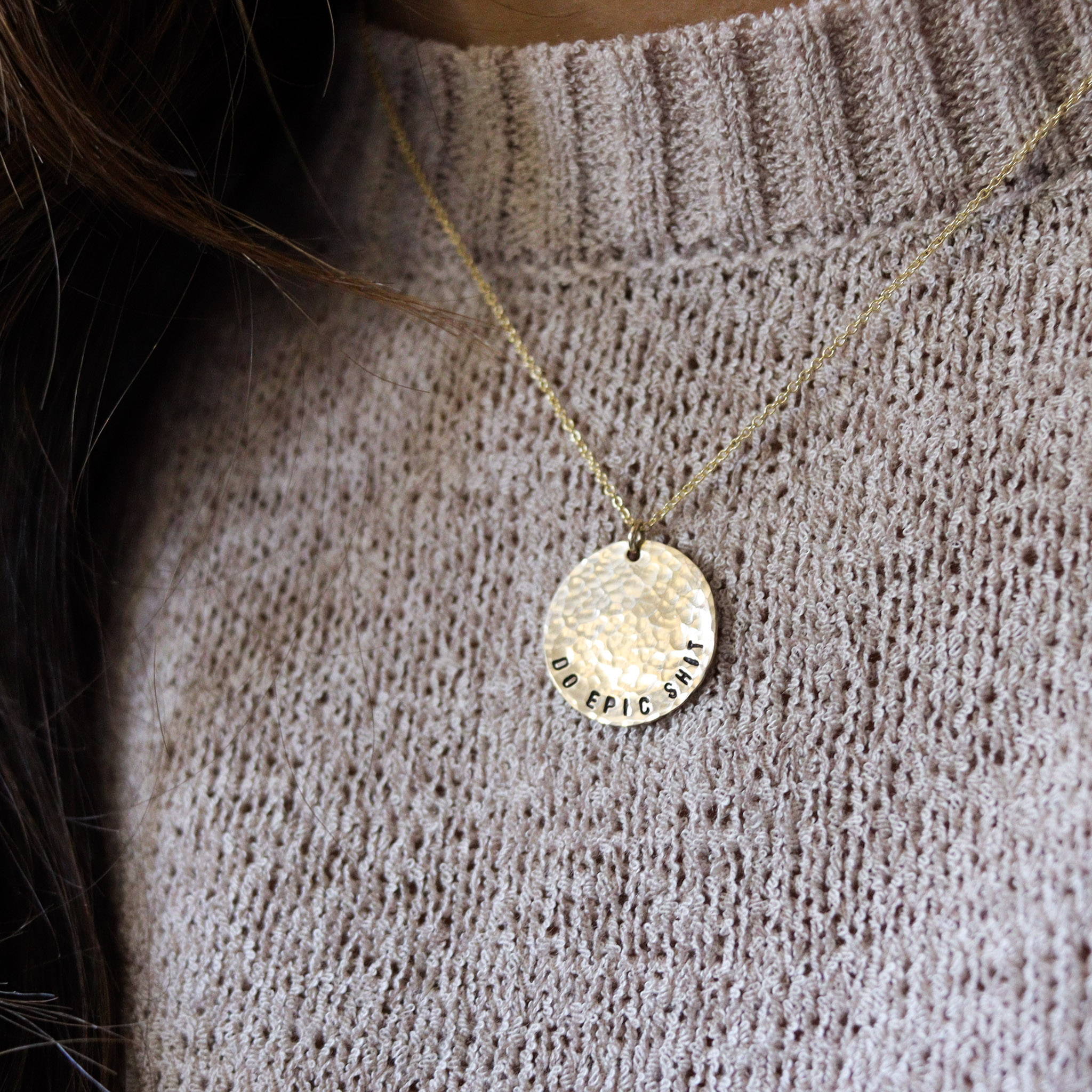 ﻿The reminder you need to get off your ass, be courageous, and leave your mark on this world. 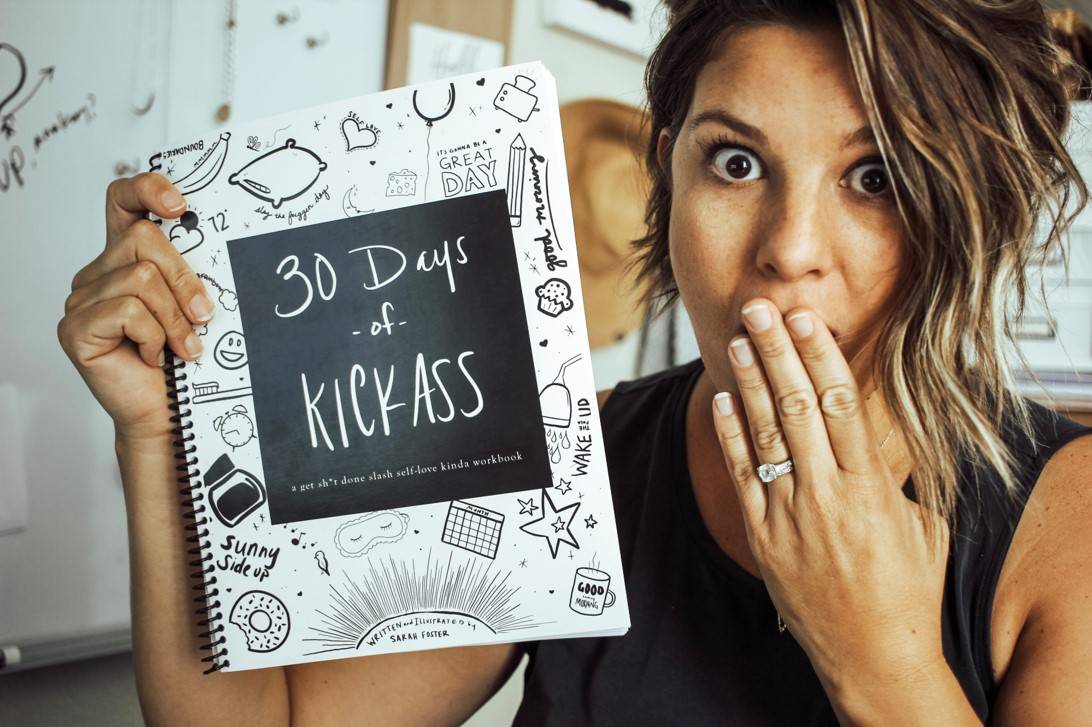 Inside this workbook are 30 daily prompts to help you get shit done and self-discovery journey.

Buy a digital copy and print it yourself! 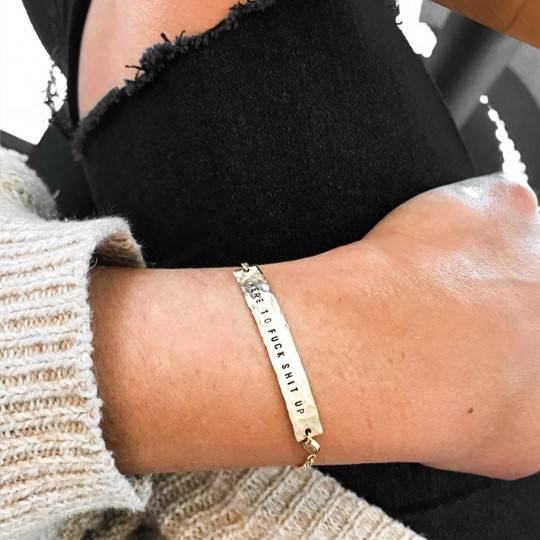 Customize it with your own word or phrase or have it read as pictured above: "here to fuck shit up" 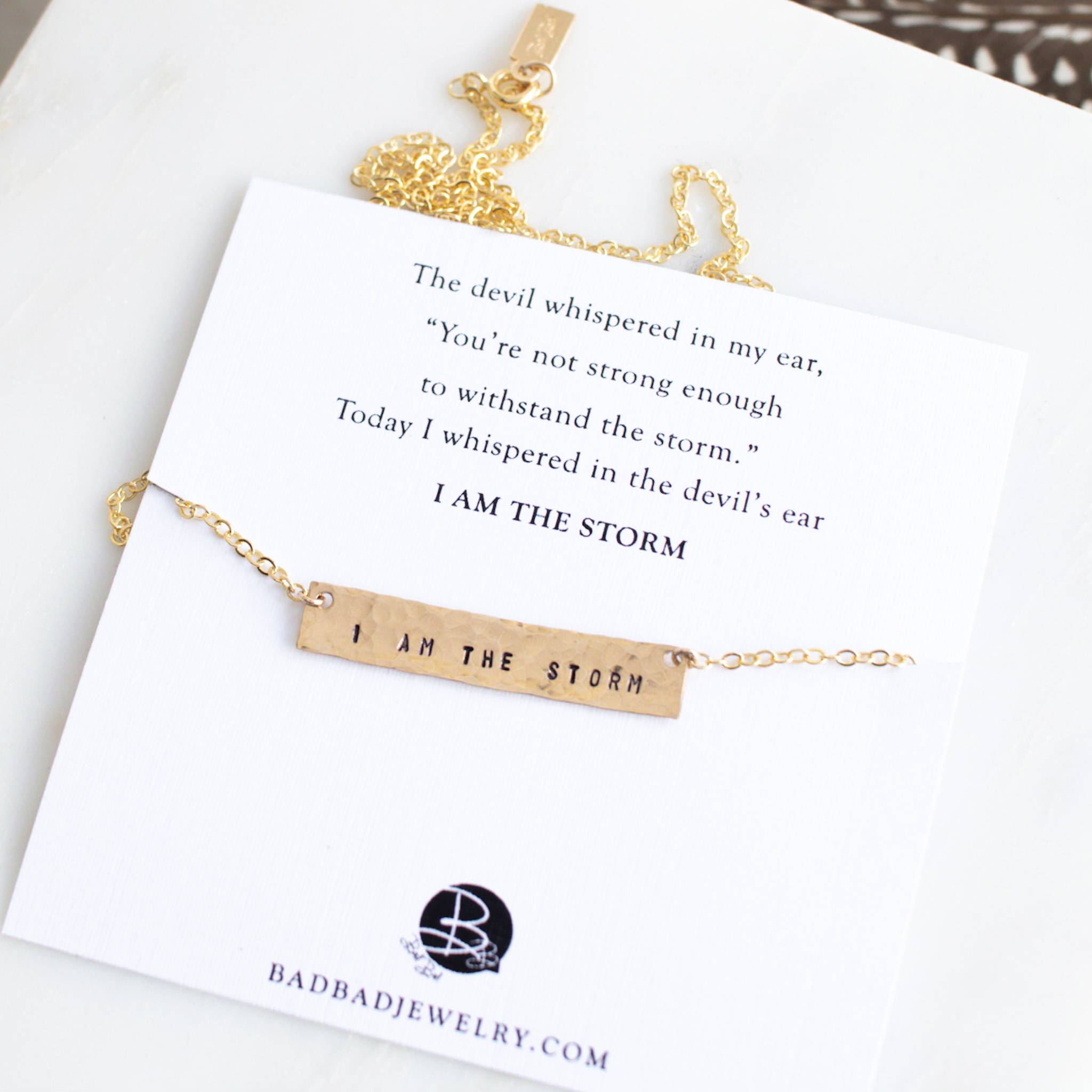 I Am The Storm Bar Necklace

A powerful reminder that you're capable of rising above any situation, at any moment, and operating from your true inner power and strength. 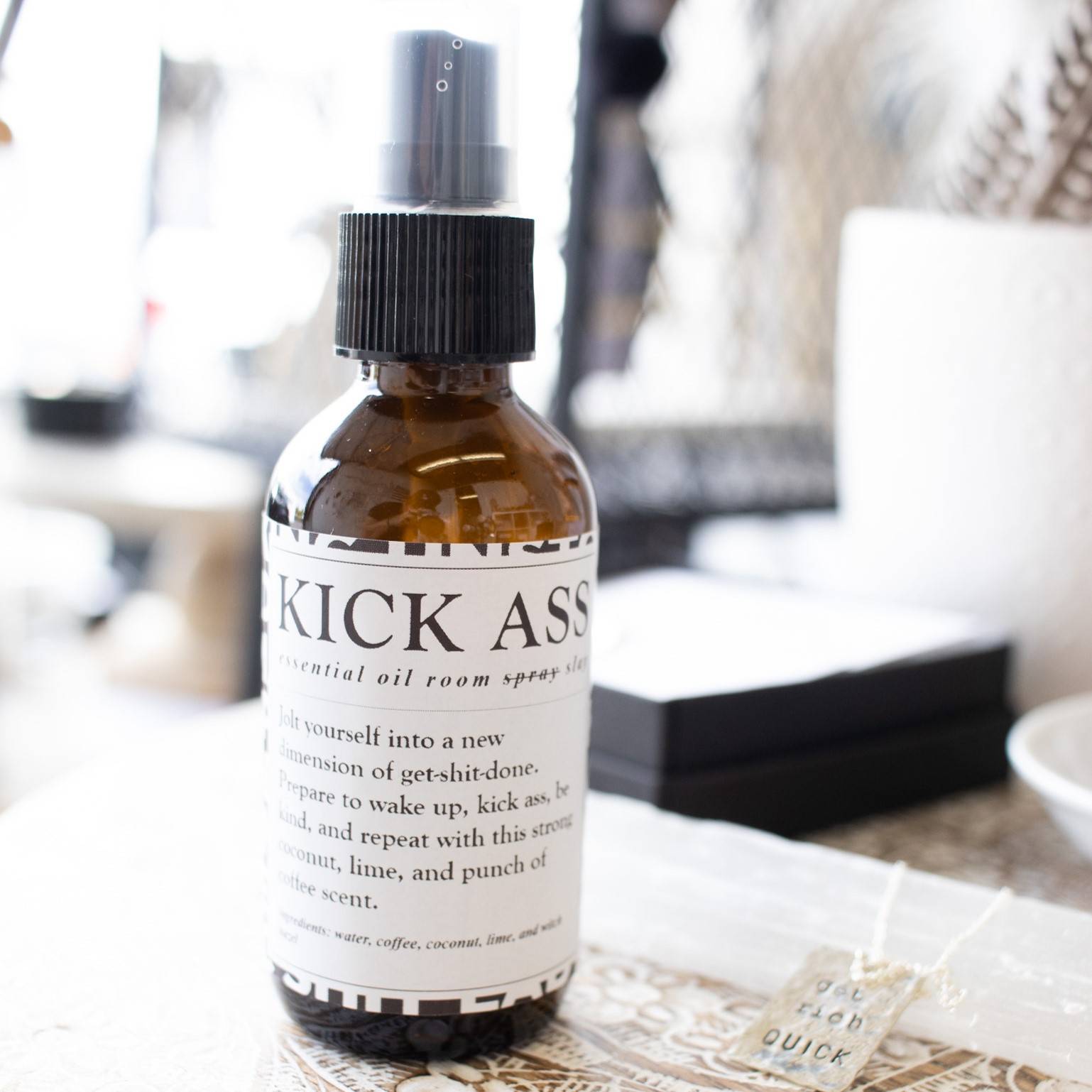 Step up your aroma therapy game and blast your space with the sweet smell of motivation. Check out all my badass room slays. (Slays, not sprays.)

Customize it with your own power affirmation or favorite phrase to anchor and embody a new level of thinking.

I'm the founder, designer, author, creative, and Chief Foul Mouth of BAD BAD. I started this as a jewelry brand in 2013, on my living room floor in my beach-side 450 square foot apartment in Mission Beach, San Diego, California.

From an early age I discovered the power of words - they saved my life. As an ambitious professional twenty-something, I wanted to make and wear everyday affirmation pieces that reminded me of my power and abilities as an individual because I knew how important my self-talk was.

We're in a time in history when women are making changes globally and I wanted to be a part of that, if even at a small scale. My jewelry designs (that I still continue to make) are an extension of a style I love: simple, dainty, and bold juxtaposition. I love the combo of cuss words on small designs.

The work I do, from jewelry to coaching, is intended to inspire and empower women to go after what they want, disrupt disempowering beliefs in exchange for a whole new mindset around what they're capable of. Women are badass, they should feel that to their bones!

We all have the power to make massive changes at any time and any age. If we stay focused and consistent, even when things feel difficult, the impossible becomes possible.

Women who push past fear and go after what they want are powerful. I want women to experience that power and know what they're truly capable of, period.

I pour my heart and soul into every design, from hammering each individual letter into the metal, attaching the chains and clasps, to the moment I seal the jewelry box and slide it into the shipping envelope.

Whether it's a one-off custom design or one of the limited products I make in small batches, my work is my message. Making things that empower women is one of my greatest joys in life.

PLACES YOU MAY HAVE SEEN MY WORK:

wHYI BELIEVE IN THE POWER OF MINDSET 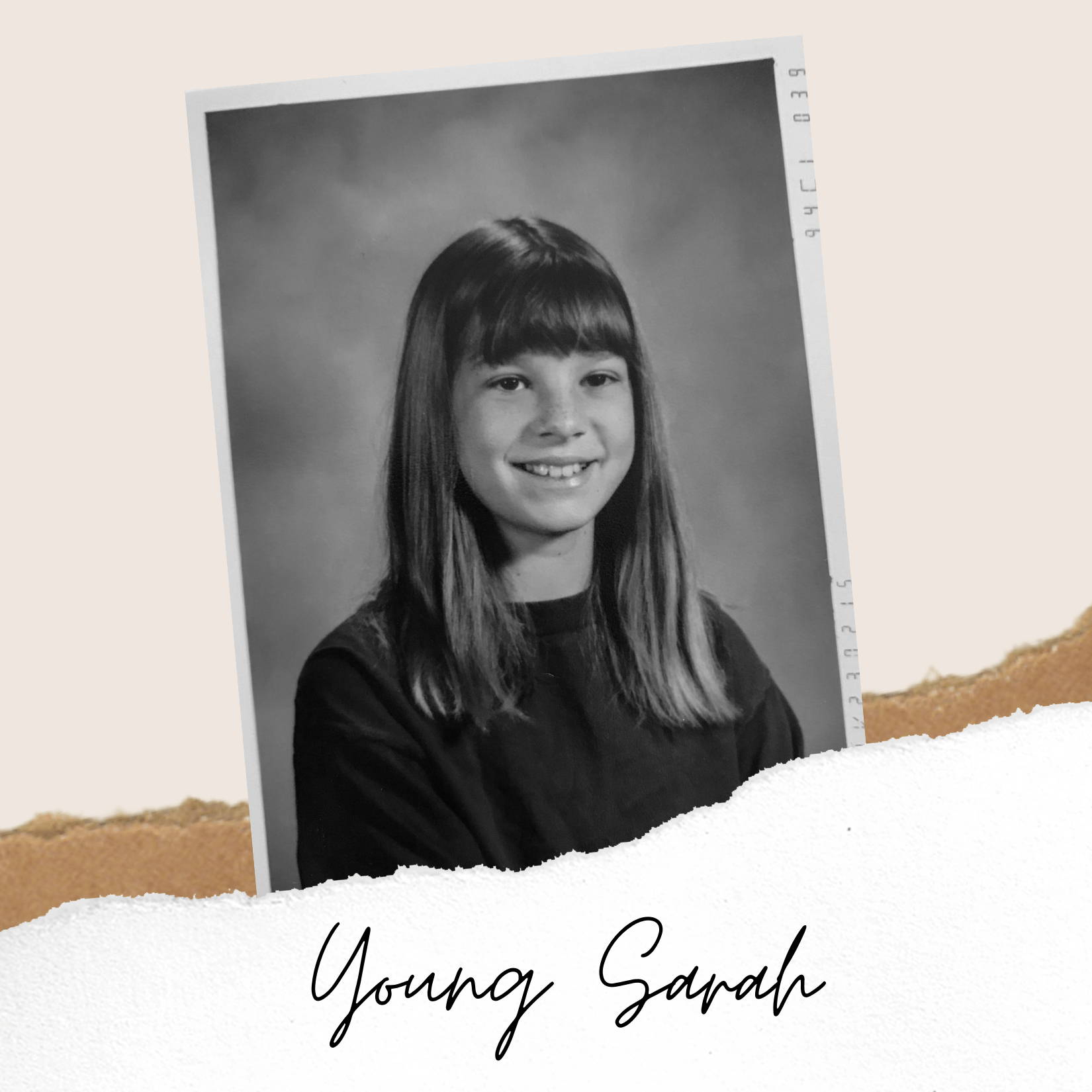 When I was young, I struggled with confidence, like real bad.

I wasn't as smart as one girl in my class, as pretty as another, and my crush didn't have a crush on me. Because of all this I felt stupid, ugly, and unlovable. I didn't just think these things, I believed them.

Looking back, it's clear I spiraled because of my critical self-talk as I compared myself to others, negative beliefs, and feeling like I wasn’t enough and would never measure up. These beliefs lead my young, impressionable mind to dark fucking places.

When all you do is beat yourself up, every damn day for months, eventually you become so weak that you buckle under the weight and pressure of not being good enough.

At school I was funny and did my best to keep a happy face, but at home I struggled, remained quiet, and distant.

I tried to take my own life on multiple occasions. From attempting to overdose on pills to holding the cold barrel of a loaded gun to my head. I'd experienced one of the darkest places of the human mind.

With shaking hands, I set the gun down when I began considering other possibilities of my future.

What would I be missing out on if I ended it all?

Would the feelings of worthlessness and hopelessness be how I'd feel forever?

Was a better life possible?

I had never asked these questions before. They were enough to stop me from pulling the trigger and instead opened my mind to possibilities and a tiny ass drop of hope.

That was the last time I'd attempt to end my life.

My depression still hung heavy though. The negative thoughts and shitty self-talk continued. I still lived each day feeling numb inside.

My mom and I were on our weekly grocery store run to stock up on food for my very hungry teenage brothers.

While I was riding passenger in the front seat of our family's large, boat-like sedan, my mom and I rode in silence, sitting with our own thoughts as soft-hits of the 80's hummed out of the stereo speakers.

While staring out the window, a simple everyday common phrase abruptly ripped into my thoughts.

The words, unlike my usual thoughts, tore my entire belief system wide open. At first I heard the words and then I felt them.

The words it's going to be okay (I told you they were simple) swept through my psyche. Faster than melting butter in a preheated pan, peace and hope found every cell in my body and saturated my whole being.

My entire body felt light as a wave of energy cascaded internally.

For the first time in years, the dark cloud that hung over me had vanished.

It's going to be okay.

The words soothed me. They had brought so much relief that during moments of despair and hopelessness, I repeated the phrase to myself.

I knew that I could lean on those 5 words when I had nothing else to lean on. They always brought peace and hope.

And I didn't know it back then, but my life's purpose was being formed at only 15 years of age.

WHY I NAMED IT 'BAD BAD'

In 2013, when I started designing empowering affirmation jewelry with explicit language, I knew my religious family and friends wouldn't approve of my bad jewelry.

There were two factors that helped me name my brand: I was inspired by a small town I grew up near named Walla Walla. Their slightly cringy slogan was The city so nice they named it twice. Once being a kid who loved math, I knew a double negative equaled a positive, which was my whole intention anyway, so I decided to double up the word to form the brand name: BAD BAD.

In all honestly, it was a placeholder until I thought of something more appropriate, but it stuck. I couldn't image it being anything else.

For me, the vibe and ethos of the brand was cemented the moment I came up with the name. I was rebelling against what I was taught was wrong my entire life: the use of foul language (among other things) but my intention was to empower women. Which was something I rarely saw in the conservative church and private school I grew up in.

The older I got, the more I began to question what I was taught and so blindly accepted as the truth. I started seeing the world differently. I asked questions, and I widened my view around religion and spiritual teachers. There were so many rules made up by man. The text I grew up reading and memorizing had some major flaws including mass amounts of skewed interpretations.

Women, who should have been major decisions makers and leaders, were ignored, their voices suppressed, made out to be lesser than, and shamed for having incredible gifts and strong spiritual connections. Many women, who had strong spiritual connections were accused of being witches. And then an entire narrative around that was created, and well, here we are. Afraid to speak up, put ourselves out there, and lean in hard to our instinct and gifts. WTF?

And while I love and honor most of the morals and values that I was taught that were instilled in me, well, fuck the other shit. Women are strong ass bitches and we're in a new a small ass window in history - let's make some cool ass shit happen for humanity by using our gifts, talents, voices, hands, inexplicable connection to something greater, and our genius.

That's what I plan on doing during my earthly pit-stop. That's what it is to embody the BAD BAD ethos - it's okay to question, go against the grain, and ruffle some feathers all for the purpose of doing good.

is the minimum number of thoughts a woman has each day. And get this, 80% of them are negative.
Do you know what you're telling yourself? The last thing we need is women buckling under low-self esteem and shit-show moments. It's time we feel less shitty about ourselves and start to do something about the things we give a damn about. 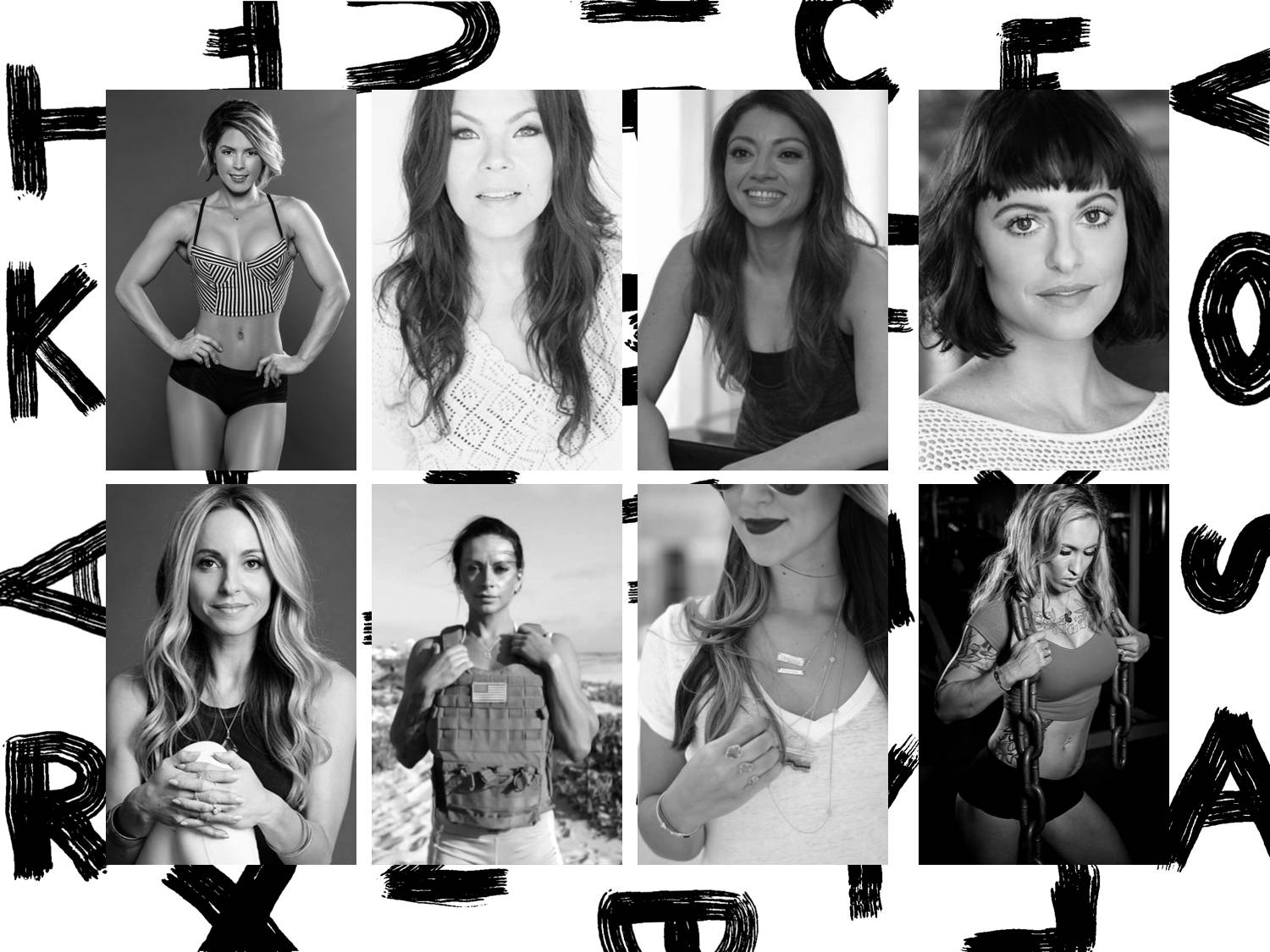 I've handmade thousands of designs and shipped them to women in over 21 countries.

I've had the honor of working closely with and commissioning work for female athletes, authors, speakers, celebrities, and everyday bad ass women.

It's my absolute honor knowing that my work has been delivered and worn by incredible, powerful, and encouraging women around the globe.
#BadBadSisterhood

No Bullshit | Words from the Sisterhood

As much as I love woo-woo, a healthy level of skepticism is solid.
If you think wearing words isn't powerful, scroll through these: 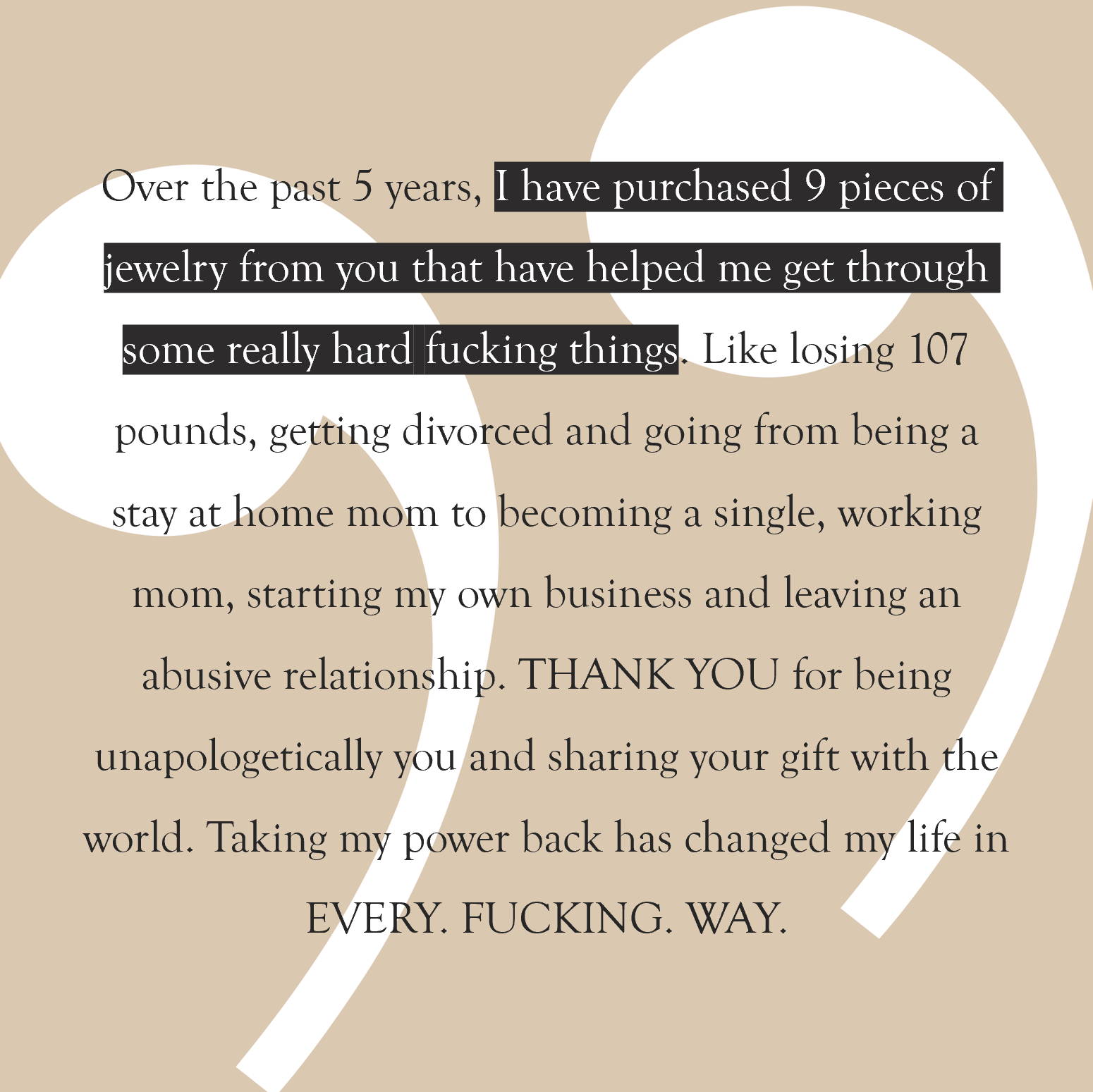 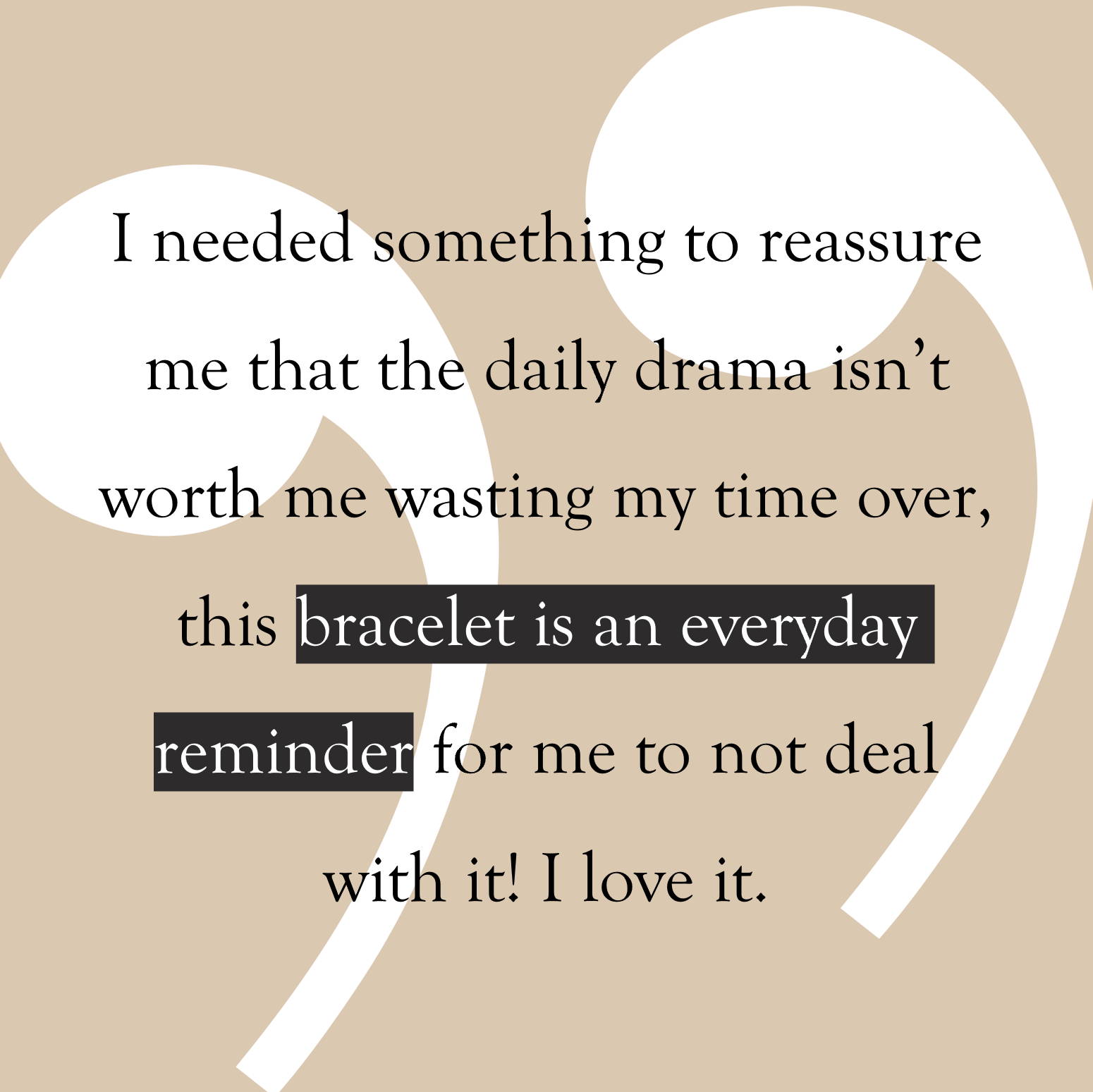 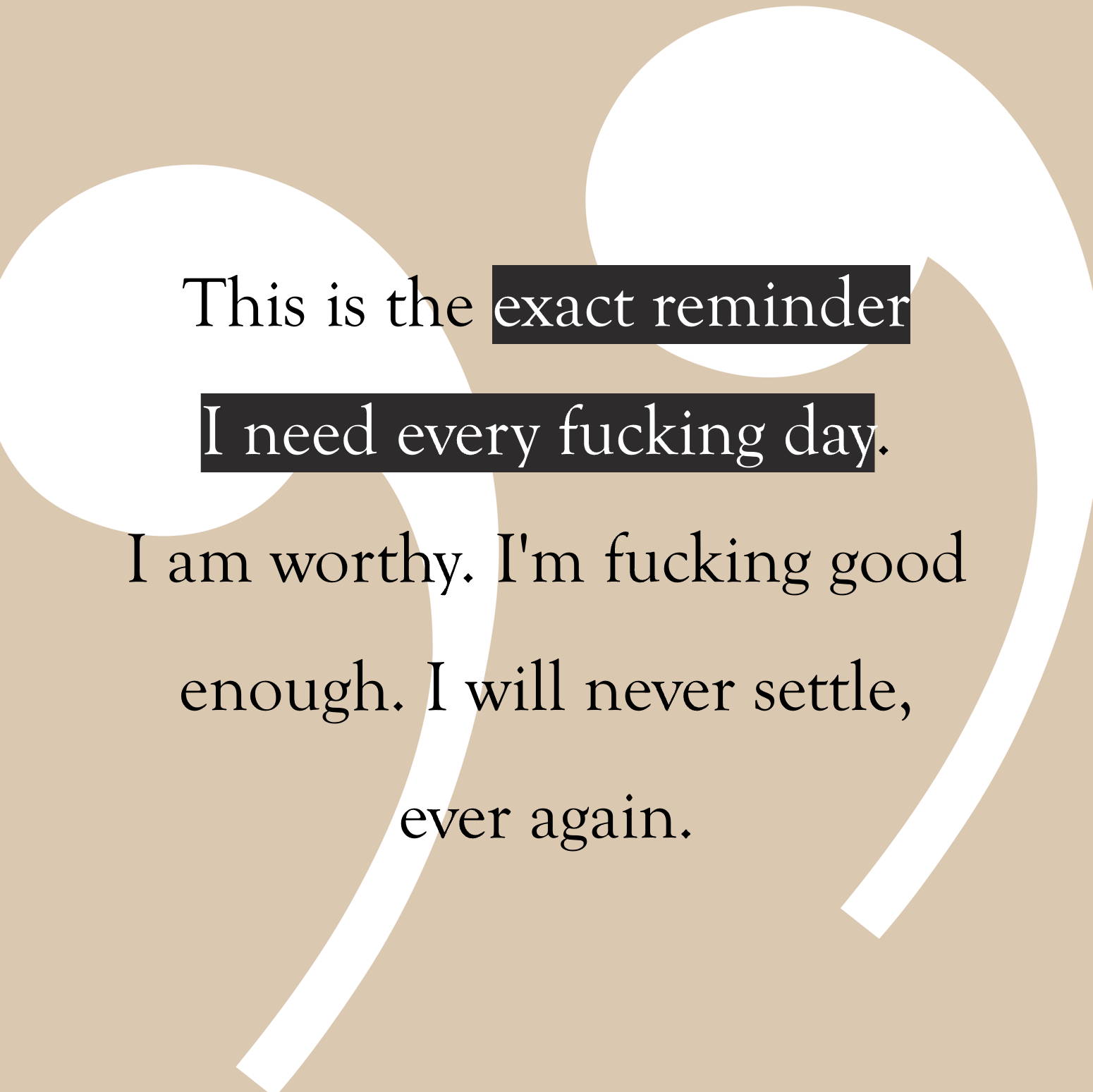 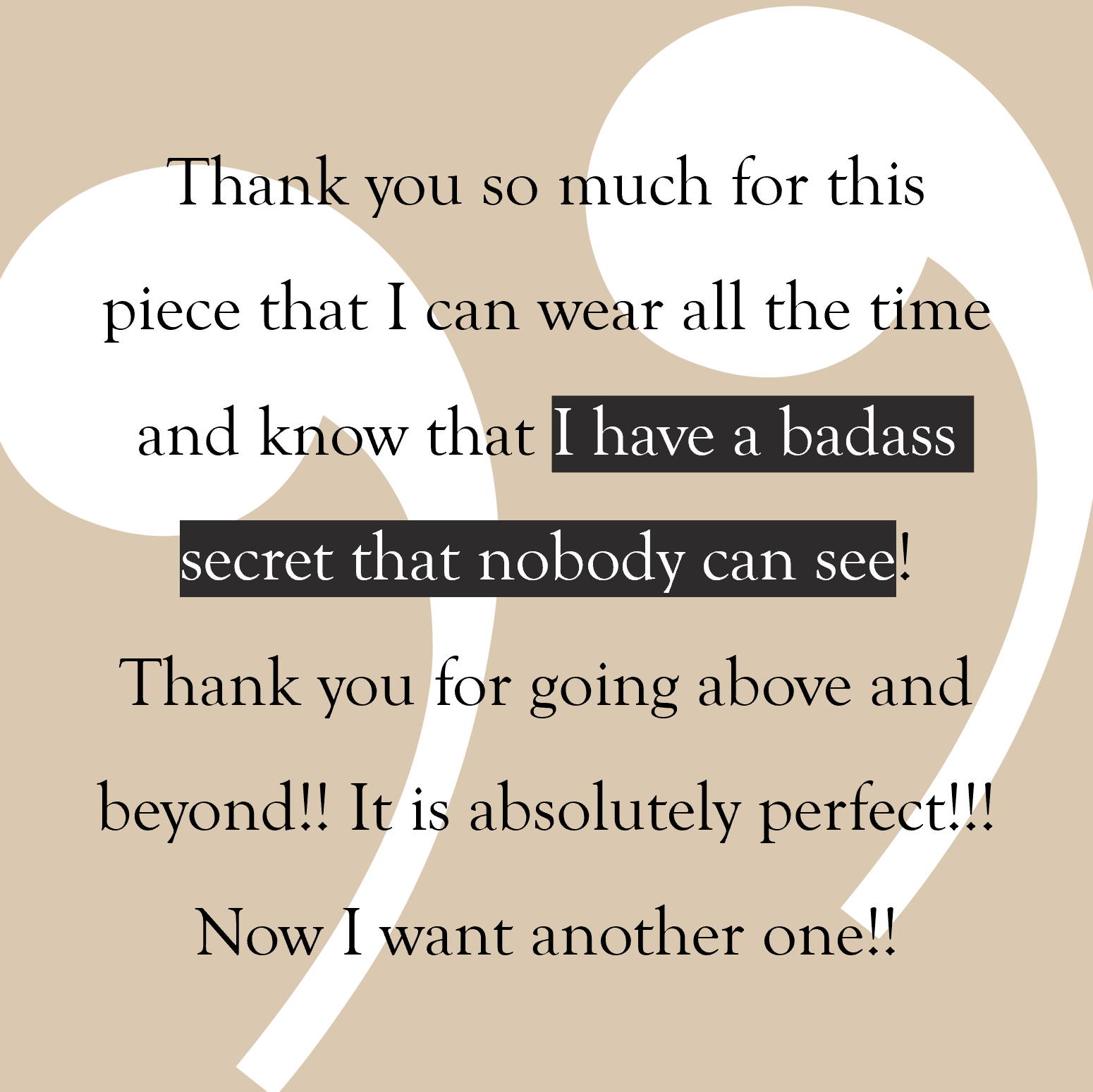 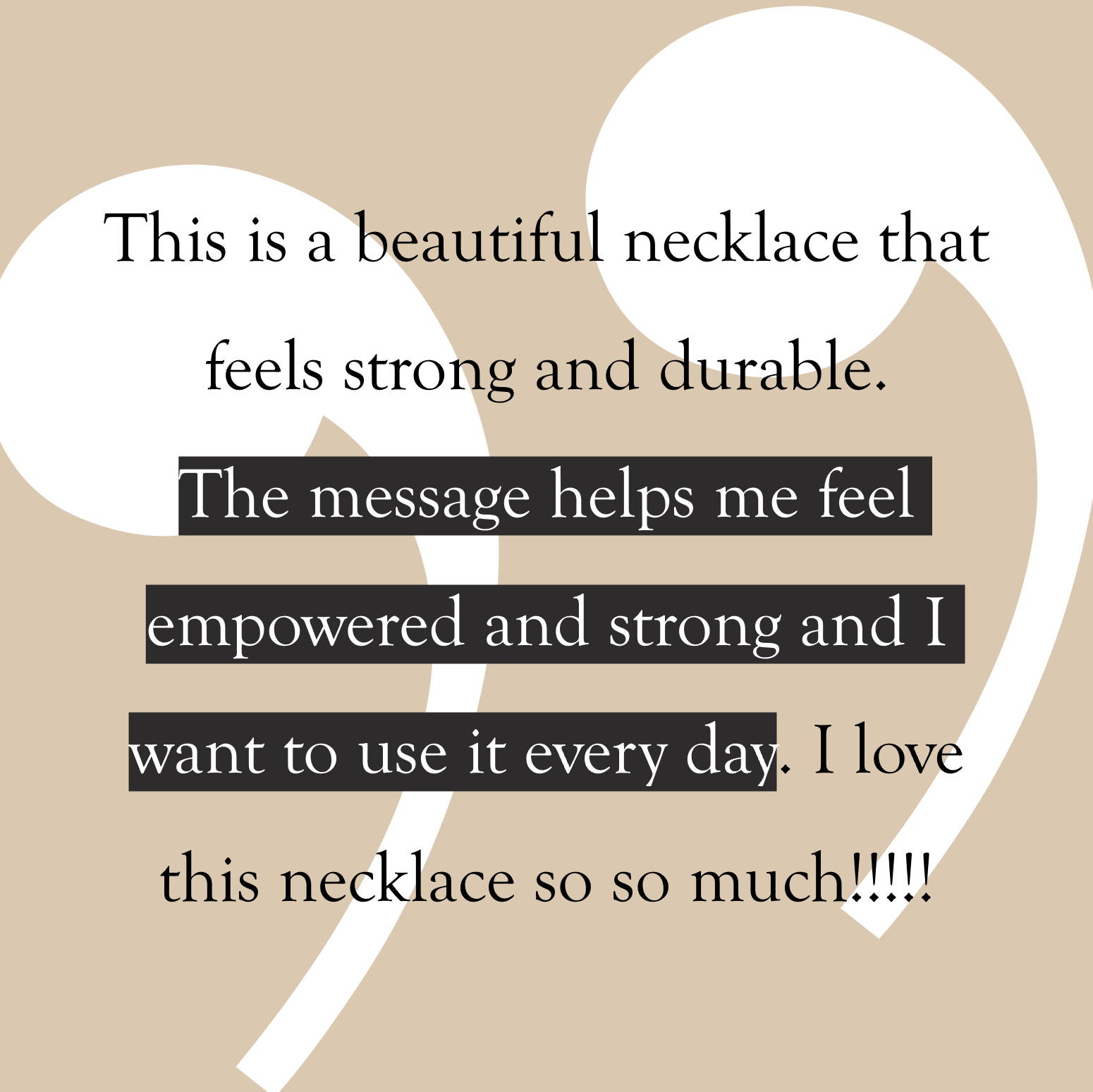 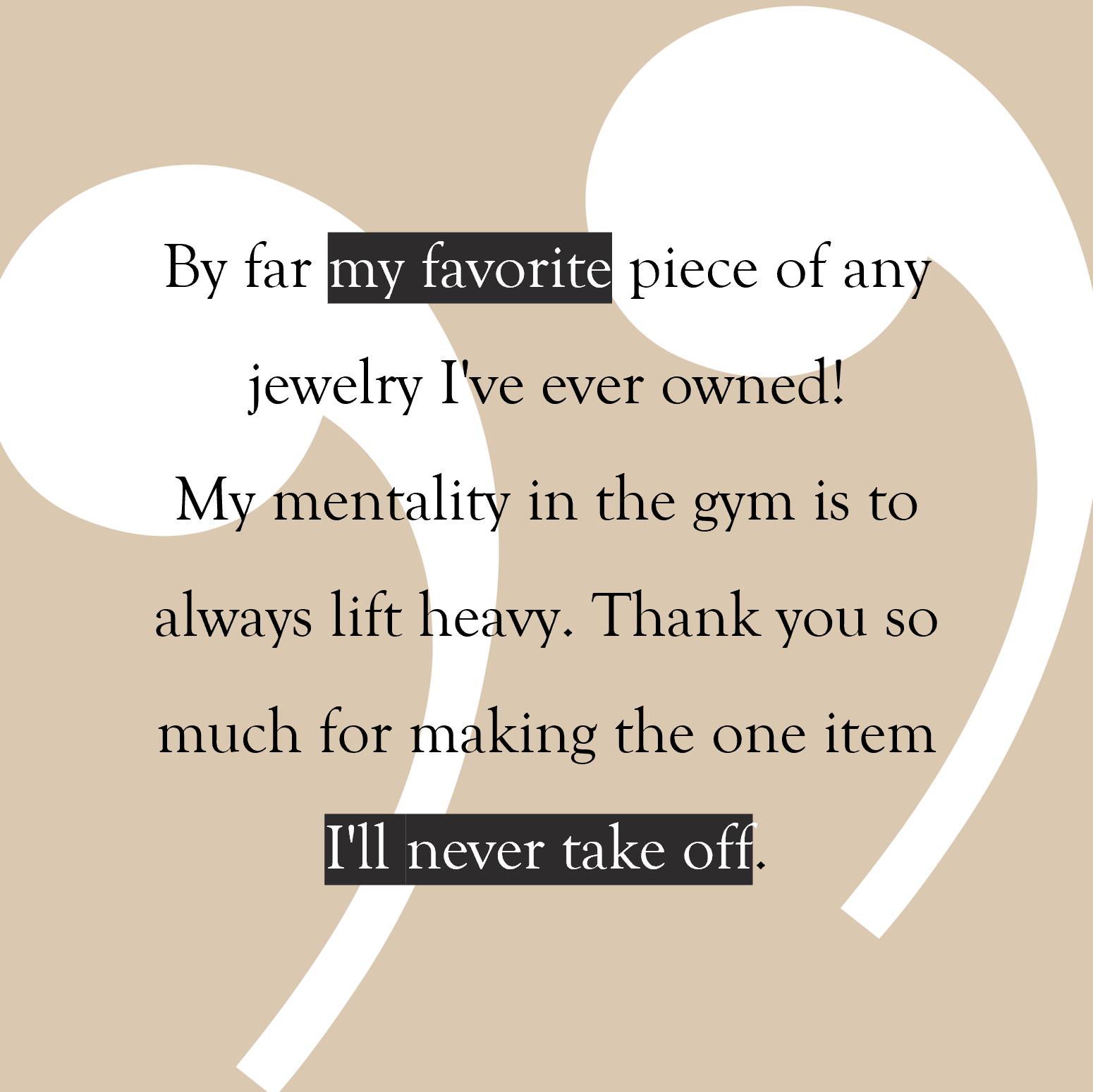 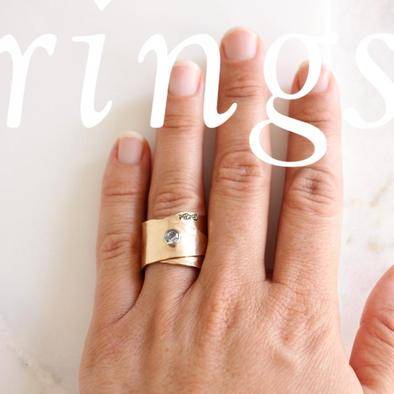 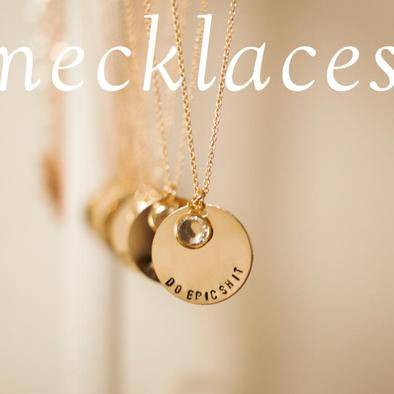